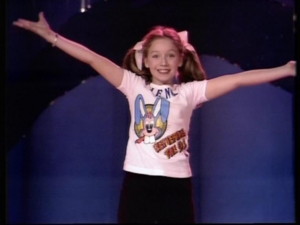 Lena performs “Rock And Roll Waltz” wearing a Bugs Bunny t-shirt with her name on it, and the slogan Remember The 50s. She then accompanies the Bachelors on the piano, as they sing “Sweet Gypsy Rose”.

Then she performs “Baby Face” as they play their instruments. Finally she sings a comedy version of “Ma! He’s Making Eyes At Me” to a terrified looking boy.