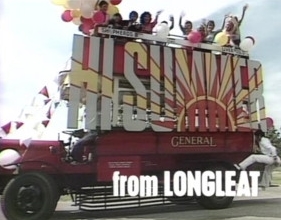 Screenshot: Health and safety not a big deal back in the 70s, Derek Griffiths just hangs of the rear side-plate.

Lena opens the show in the grounds of Longleat Stately Home, in a song and dance routine titled A Weekend In The Country, with the rest of the cast.

Next, she performs Love Me Love My Dog in a short video sequence.

She then appears in a comedy sketch playing Leslie Crowther’s overweight, bearded daughter.

Later, she sings a short version of Ma! (He’s Making Eyes At Me) on a bench with a chimp.

She ends the show singing Walk with The Animals with the rest of the cast.