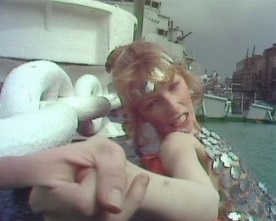 Screenshot: Lena Zavaroni onboard HMS Belfast (currently unconfirmed but as the only ship of that type on the Thames I believe its got to be the one.)

The show opens with a medley of songs about London , filmed at locations around the city. Lena sings Maybe It’s Because I’m A Londoner on board a riverboat.

She then appears in a comedy sketch, where Carl Wayne sings Thank Heaven For Little Girls while she is elevated high into the air.

Next she appears in a song and dance routine, Solid Silver Platform Shoes, onboard a warship.

Later she appears with Leslie Crowther, dressed as Flanagan and Allen, singing Down Forget Me Not Lane.

She ends the show performing Maybe It’s Because I’m A Londoner, with the rest of the cast and audience.