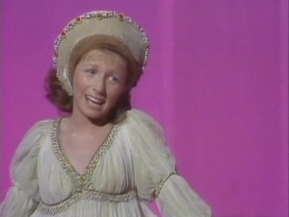 Screenshot: Lena Zavaroni performing Pinch Me Am I Dreaming

Lena opens the show with the rest of the cast on bicycles, singing the Pushbike song.

She then appears in a comedy sketch with Derek Griffiths, where she does a Bruce Forsyth impersonation, and they sing Bunny Girl together.

Next she appears in a Romeo and Juliet scene while singing Pinch Me Am I Dreaming.

Later she pops out of a huge costume basket, wearing silver boots and singing These Boots Are Made For walking.

She ends the show dancing along to Derek Griffiths version of Walking Happy.